Get fresh music recommendations delivered to your inbox every Friday.
We've updated our Terms of Use. You can review the changes here.

by The Zambonis & James Kochalka Superstar 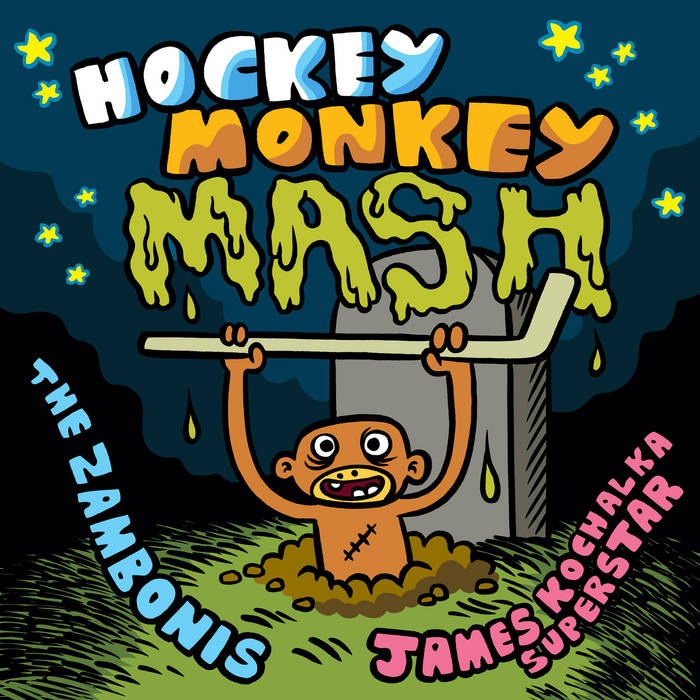 In 1996 James Kochalka left a voicemail on Dave Zamboni's answering machine. "Hey, It's James, I think The Zambonis should write a song about a hockey playing monkey." When such a great idea is pitched, great people listen (not smart but, great people). The two teams put their heads together and wrote and recorded "Hockey Monkey". In1997 James Kochalka and The Zambonis released the song “Hockey Monkey.” Produced by Original Zamboni and Grammy winning Peter Katis (Interpol, National, Kurt Vile etc etc) the song and video took on a life of its own. Nickelodeon’s legendary show KaBlam! made a video for it, Fox TV used it as THE THEME for a show called “The Loop”. EA Sports put it on its classic PlayStation/Xbox game soundtrack NHL HITZ. The moneys made from the song gave JAMES the freedom to quit his job at a Chinese restaurant in Burlington, VT. It also gave The Zambonis the chance to perhaps pay a manager and a publicists to further their career but, instead they bought a $2500 monkey suit and created their mascot/best primate buddy The Hockey Monkey.


The whole crew is back and have written a new special Halloween haunter!
The Zambonis, James Kochalka Superstar and Peter Katis present
“Hockey Monkey Mash”

I was working in the lab, late one night
When my little monkey subject, he took a bite
Of WHAT! A Radioactive Banana!

Then he grabbed a little hockey stick
And smashed the beakers
And WEIRD chemicals splashed all over his sneakers
Transforming them to... Hockey Skates!

Now all the scientists are running around,
Looking for the monkey but he can’t be found
It was the Mash!
The Hockey Monkey Mash!

And all the Mummies are running around,
Looking for the children but they can’t be found
It was the Mash!
The Hockey Monkey Mash!

The Referees are running around
Looking for the Monkey but he can’t be found
It was the Mash!
The Hockey Monkey Mash.

Dracula and the werewolf too
Were looking for the children
But the children knew...
It was the mash!
The Hockey Monkey Mash.

We have been writing songs only about hockey since 1992. Some may consider that a bit OCD but we call it "extremely focused". Have an ice day, The Zambonis

Bandcamp Daily  your guide to the world of Bandcamp